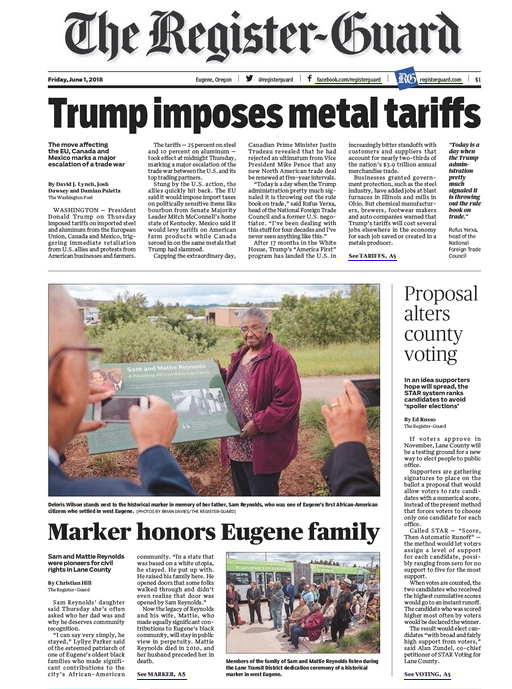 Proponents say the present winner takeall- method of voting has problems, including forcing voters to support least objectionable candidates, or situations where candidates with similar views split the vote, which can allow the emergence of so-called “spoiler” candidates.

Under STAR voting, the “voter never gets trapped into the dilemma of trying to chose between candidates that they like almost as much as the other,” said Zundel, a Eugene resident and former political science professor who ran for Secretary of State in 2016.

In those cases, “that can leave voters with the fear that their vote will be split and allow a candidate that they don’t like to emerge.”

Allowing voters to rate candidates would “eliminate any possibility of a spoiler election,” he said.

The proposal is similar to so-called rank choice voting, which has been implemented in such places as California and Washington. Under this method, the final top contestants in a multiple candidate race are determined by eliminating candidates with the fewest first-choice votes.

With “Score, Then Automatic Runoff” voting, however, voters assign a score to each candidate, rather than rank them by first, second or third choice.

Supporters are gathering signatures to place the proposal on the Nov. 6 election ballot. They need to collect the signatures of 11,506 registered voters by June 21.

Organizers have collected more than 6,000 signatures so far, and have hired a firm to collect another 5,000 signatures, Zundel said. Separately, “we are getting about 1,000 a week,” he said. “We expect to get on the ballot unless something untoward happens.”

The STAR Voting for Lane County proposal also would move the nonpartisan races for Lane County offices — Lane County Board of Commissioners, sheriff, assessor and district attorney— to a single election, in November.

Presently, the races take place in the May primary, even though parties do not nominate candidates for the offices.

In these races, the candidate who gets more than 50 percent of the vote advances alone to the November general election ballot.

In races where no candidate exceeds 50 percent of the vote, the two top vote-getters face off in a November runoff.

If approved by voters, the proposal would apply only to elected officials of Lane County government, though proponents say that would be just the start. Another group is gathering signatures in Multnomah County to place the proposal before Portland voters.

“We really envision this as a reform that can work at all levels of government, all over the country,” said Mark Frohnmayer, the other chief petitioner of STAR Voting for Lane County. “But in order for it to go everywhere, it needs to go somewhere first.”

Frohnmayer and Zundel are scheduled to speak about their proposal at the City Club of Eugene at noon on Friday.

Frohnmayer is the son of the late Dave Frohnmayer, who was an Oregon attorney general and University of Oregon president.

Dave Frohnmayer was the Republican nominee for governor in 1990. A political moderate, he lost the race to Democrat Barbara Roberts, when Al Mobley, an independent social conservative candidate, captured 13 percent of the vote.

Mark Frohnmayer said his views on how elections can be swayed were informed by father’s loss in the election 28 years ago.

This is not a partisan issue, because the spoiler effect happens in both (Republican and Democratic) sides over and over again,” he said. “It’s just a horrible feature of the way we vote.”

Limiting races for nonpartisan county offices to one election in the fall also will have the benefit of reducing the influence of money in campaigns, Frohnmayer said.

“If the candidates only have to run one election, you have to raise less money and you are less beholden to who you got money from,” he said.

The Whiteaker Community Council, the neighborhood association of the area northwest of downtown, used STAR voting in April to elect 11 members of the council.

“It allowed us to give high scores to the candidates we strongly supported, slightly lower scores to candidates we liked but who weren’t our favorites, and scores as low as 0 to those candidates we didn’t support at all,” Brad Foster, a member of the council, said in a statement after the election.

“This was a big improvement on our prior system of casting votes for up to 11 candidates. The old system felt like we were voting someone off the island by not including them in the 11, but STAR allowed us to grade the candidates in a more refined way.”

“I can’t wait for the day all elections use this system,” he added.”It’s fair and allows for the true, nuanced views of the voters to be expressed.”

About The Register Guard

Follow for breaking news, stories, photos, RTs of our journalists and more