It's all about the idea that we should be able to vote our conscience, our votes should never be wasted, and our elections should accurately reflect the will of the people.

Working locally we are building a national movement and creating a model for more fair, inclusive, and representative elections. No more spoilers, no more choosing between the lesser of two evils. No more stepping stone reforms. Our current system is broken, but it doesn't have to stay that way.

STAR Voting for Eugene has to be our home run. We turned in 10,406 signatures to get this on the May 2020 ballot. It came down to just 23 signers who were subjectively rejected on the basis of their signatures alone. We turned in 25 notarized affidavits to the Mayor verifying that these people did sign and it worked! City Council has agreed to call a work session to refer STAR to the May ballot. We have the confirmed support of 5 out of 8 members, plus the Mayor. The cavalry has arrived!

STAR Voting for Lane County has been gathering signatures since July 31st, 2019. The good news is that the Lane deadline to make the Nov. 2020 ballot is still over a year out. We're half way there and need to keep it up!

To get an initiative going in your area reach out to team@equal.vote

STAR Voting is an innovative Oregon grown voting method. With STAR Voting we would skip the low-turnout primary and just vote once in November for non-partisan races.

STAR stands for Score - Then - Automatic - Runoff, and that's exactly how it works: 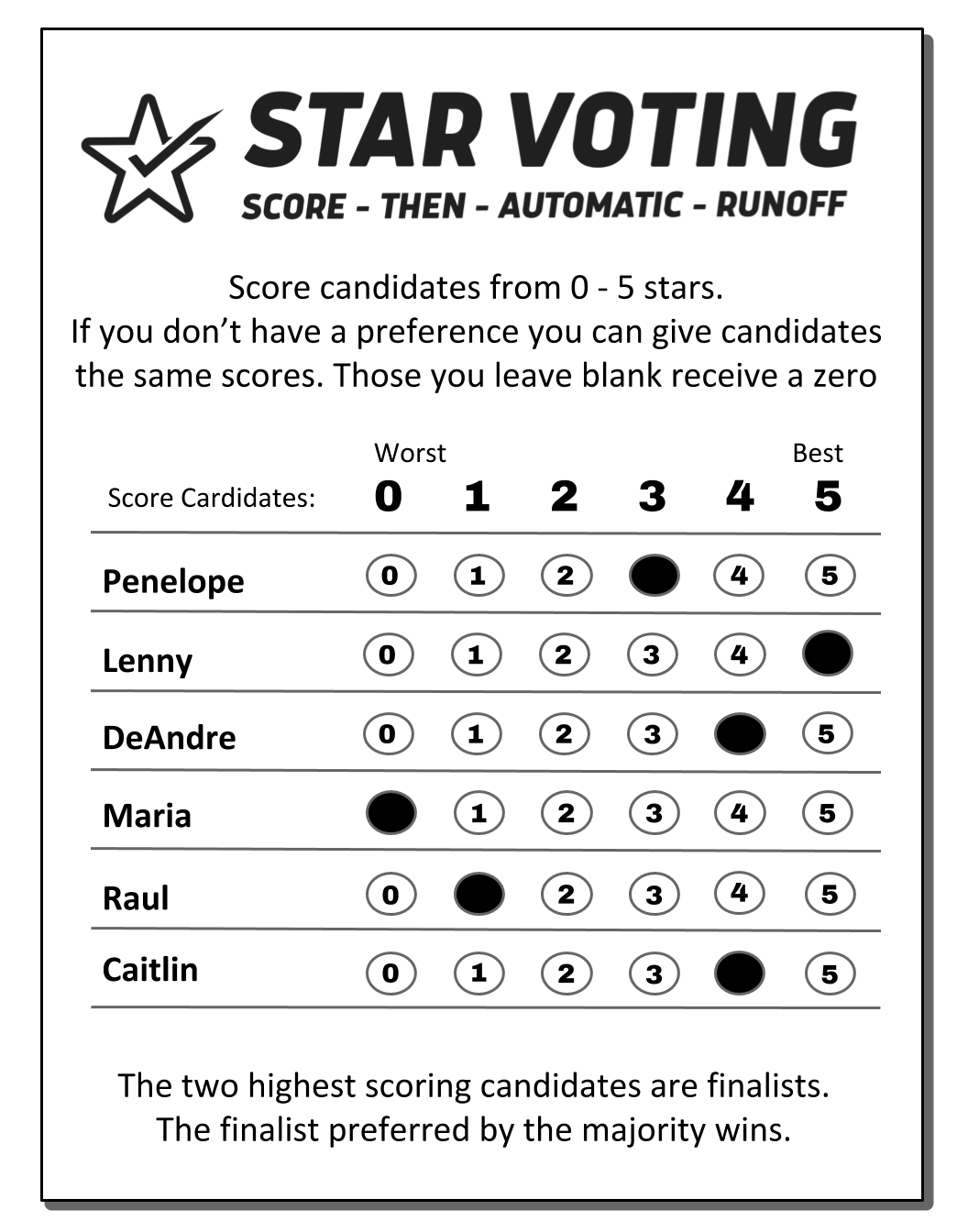 You score candidates from zero (worst) up to 5 stars (best). Your vote automatically goes to the finalist you preferred between the two highest scoring candidates, so even if your favorite can't win, it's safe to vote your conscience without worrying about wasting your vote. 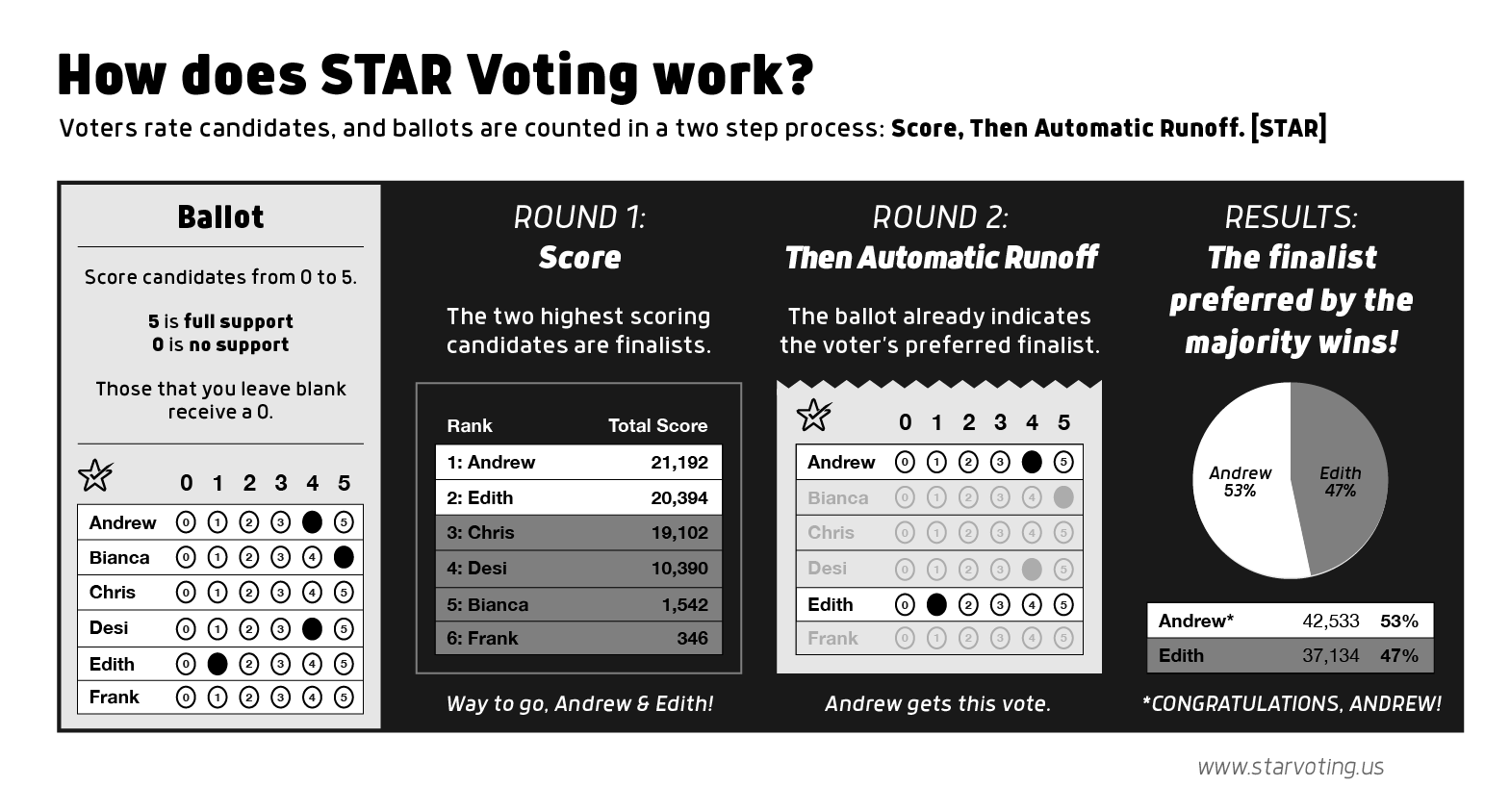 With STAR Voting we could skip the low-turnout primary and just vote once in November. STAR Voting eliminates vote splitting and the spoiler effect, so it’s highly accurate with any number of candidates in the race. Skipping the primary would save taxpayers money, would save voters time, and the shorter campaign season would make it much more accessible for grassroots candidates to run for office.

For situations where a primary is needed, such as the presidential primary, STAR Voting can be used for both elections.

Honesty is the best strategy. Strategic voting is not incentivized.

Voters' best bet is to give their favorite(s) 5 stars, to give their least favorite(s) a zero, and to show their preference order and their honest level of support. In contrast our current system has strong incentives to vote lesser evil, strategically supporting the front-runner on your side who you think can win.

This kind of herd mentality voting is a direct product of the fact that Chose-One Plurality elections are only accurate when there are two candidates in the race. When we have more than that our elections become highly prone to a phenomenon called vote splitting, where a majority who fails to come together around a single candidate can end up divided an conquered.

Having more choices and more good candidates in the race should be a good thing, but in our current system, having more candidates on your side puts you at a huge disadvantage.


Highly accurate, no matter how many candidates/parties are in the race.

STAR eliminates vote splitting and the "Spoiler Effect". This is really at the heart of the matter, and is at the root of the many problems addressed by STAR Voting. The key to eliminating vote splitting is that every voter must be guaranteed an equally weighted vote. Any way I vote, you should be able to cast an equal and opposite vote. The system should not play favorites.


No parties, candidates, or voters are excluded.

The single non-partisan general election ensures that our most important decisions are made in the election where the most voters are active. Every voter deserves to have someone they support on the ballot and when voters have candidates they believe in they turn out in much higher numbers.


Every voter has an equally weighted vote.

Our current system does not give ever voter an equally-weighted vote in elections with 3 or more candidates and yet the the Supreme Court has ruled that One-Person-One-Vote requires the "weight and worth" of each vote to be as equal as is practical.


STAR Voting doesn’t give anyone an unfair advantage.

Our current system gives major advantages to the two major parties, and yet when it fails due to the "spoiler effect" it often fails in favor of the more extreme and polarizing candidates. Other proposed voting systems are a step up, but can also play favorites. In contrast, the combination of the expressive ballot and the Equal Vote makes STAR Voting fair and equal.


Combats the influence of money in politics.

Solving the "spoiler effect" would be a big deal for grassroots candidates and those without big money backing. STAR Voting would eliminate the incentive to only vote for the front-runner on your side who has raised the most money. Rather voters could vote based on the merits of the candidates themselves.

Eliminating the primary would also make it more accessible and affordable to run for office. Candidates would only need to run one race, and could do the bulk of campaigning in the summer. It's much easier to connect with voters when the weather is good and people are out and about.


Even if your favorite can’t win your vote helps prevent your worst case scenario.

If your favorites don't make the runoff your vote can still make a difference! In the runoff, your ballot is counted again but this time STAR looks at your preference order, not the specific scores given. Your ballot becomes your one vote. Your full vote goes to the finalist you scored higher.

If you do have a preference between candidates, it would be best to show it. This is an example of how STAR Voting incentivizes honesty, as opposed to our current system which incentivizes strategic and dishonest voting.


STAR Voting can be locally tabulated using the current process.

STAR Voting is "precinct summable". That means that STAR ballots can be counted locally, are easy to audit, and are more resilient to fraud or hacking than Ranked Choice systems.


Fully constitutional in Oregon, and around the country. This is a nationally viable proposal.

Here in Oregon our state constitution explicitly allows for alternative voting systems including rating systems, ranking systems, hybrid systems like STAR, and proportional representation systems, but other states are not as lucky. For example, Ranked Choice Voting (RCV) recently was passed in the state of Maine, but was ruled unconstitutional. As a result it can only be used for some races and not others. Many states require a win "by plurality" and don't allow systems where the winner of the election can change after subsequent rounds of counting.

Ranked Choice Voting also runs afoul of the One-Person-One-Vote mandate, as some ballots will be "exhausted" and not end up being counted in the final round of voting. RCV doesn't provide an equally-weighted vote.

STAR Voting was created to better accomplish the goals of systems like RCV while addressing these flaws and issues. If passed STAR would become the gold standard for One-Person-One-Vote.

The combination of the Equal Vote, the incentive and ability to vote honestly and expressively, and the non-partisan election format means that we believe STAR is our best bet to combat polarization and end 2 party domination.

In our current system even partisan voters are getting the short end of the stick. Whether STAR Voting is used for non-partisan races (as is being proposed in Lane County, Oregon,) or if it was eventually used for partisan races like our presidential primary, STAR would allow candidates who best represent their voters to rise to the top.

This would allows similar candidates to campaign in coalition if they shared a platform and values. Preference voting in general has been found to encourage positive campaigns and to discourage mud-slinging!