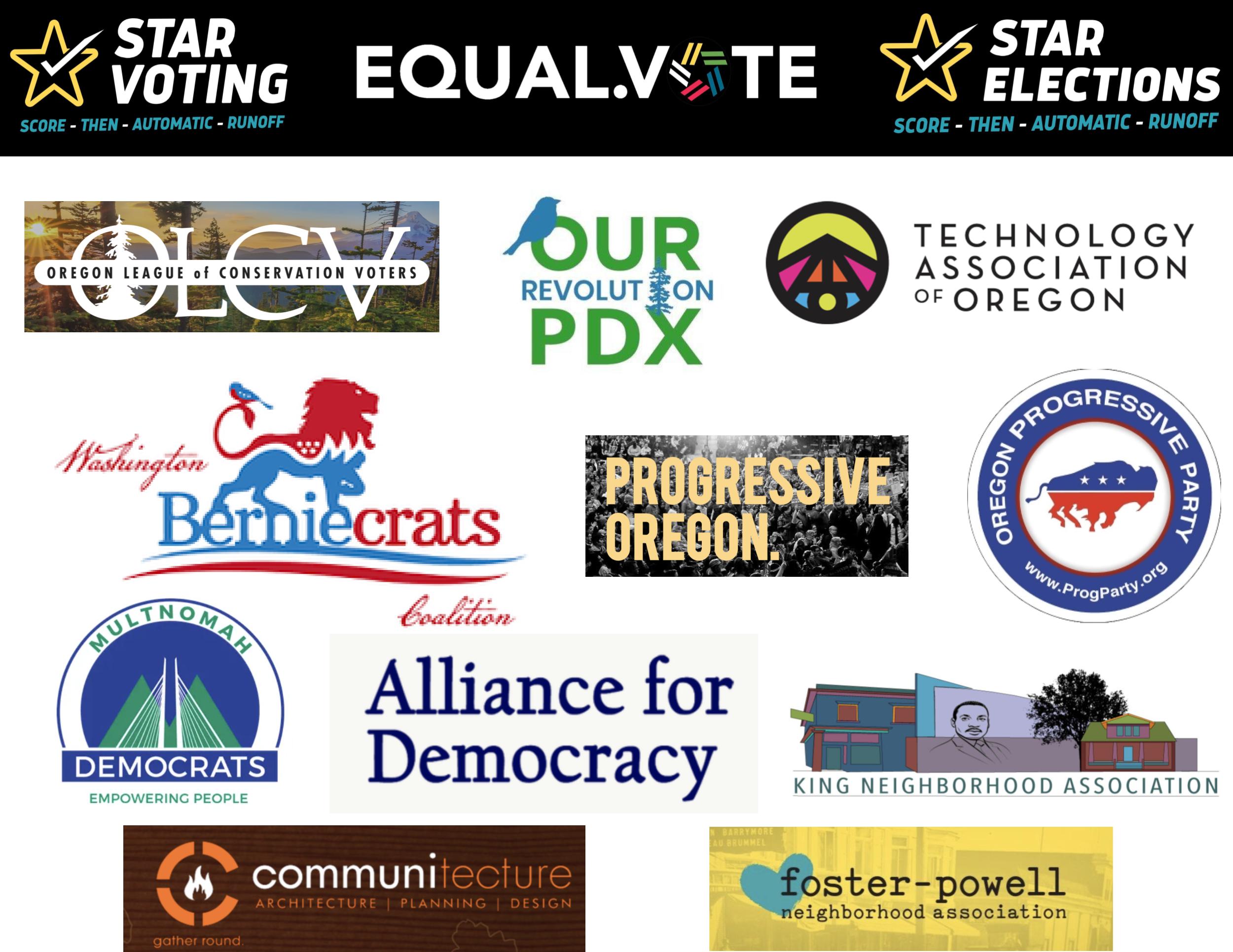 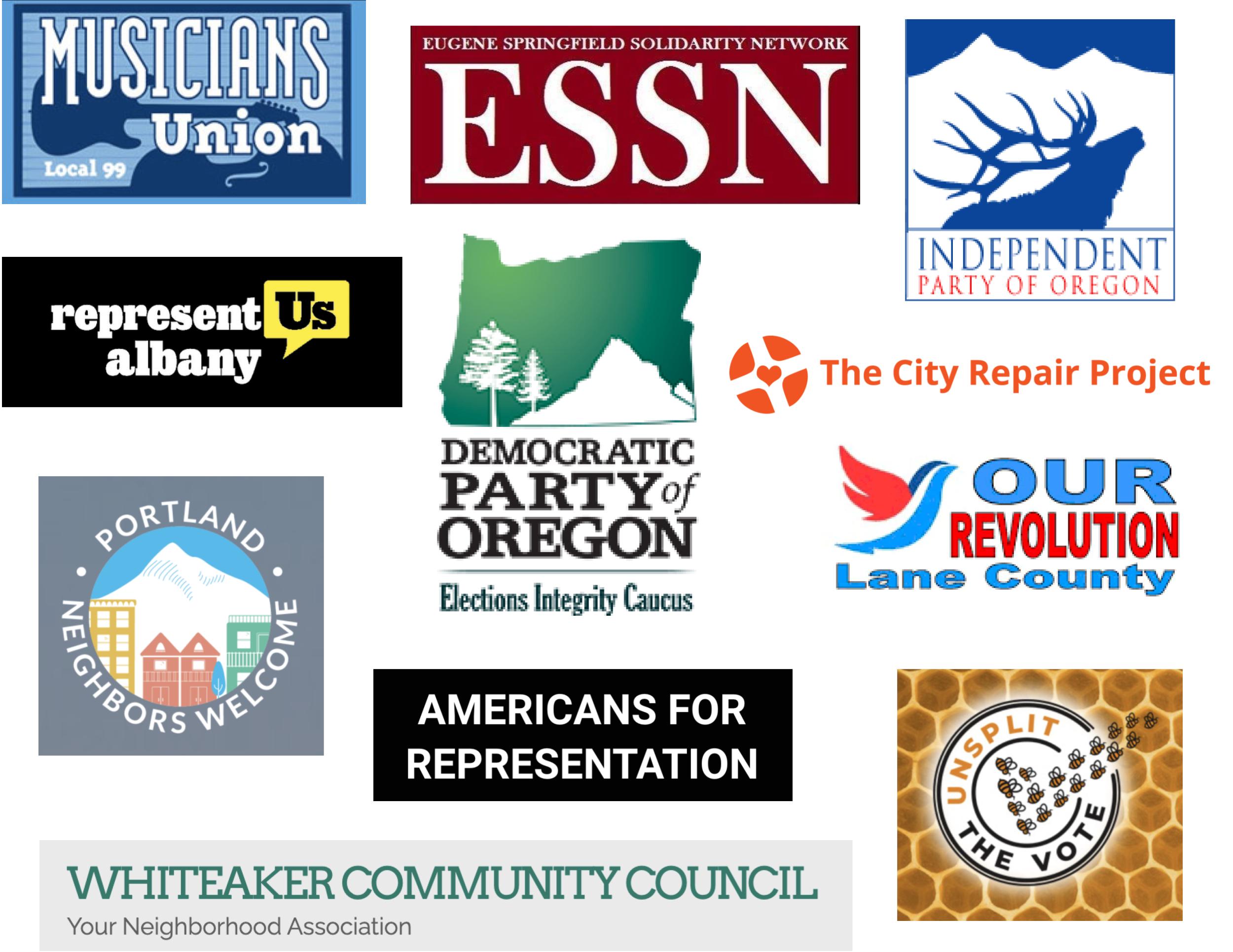 (Titles are for identification only.)

* Jamie McCloud Skinner, Candidate for OR Secretary of State

We want your name here too!

Please email [email protected] to endorse STAR Voting for Lane County or the movement for STAR Voting in general.

Arguments in favor of STAR Voting:

* “Everyday working class Oregonians deserve a democracy that works for, and is accessible for all of us. That’s why I am proud to endorse the adoption of STAR Voting in Oregon, at all levels of government. STAR Voting will give Oregonians more choices, more freedom, and more transparency in our elections. We have to dare to build the world that we want to live in, and I want to live in a world with fair, inclusive, and equitable elections. I want to live in a world with STAR Voting. Let’s build that world together!” - Paige Kreisman, candidate OR House D-42

* "I support any effort to decrease power politics and increase the voice of the people, which this is designed to do." - Joe Berney

* "I encourage you to vote FOR STAR Voting, a system where leaders who bring people together have the electoral advantage." - Jordan Pape

* "I believe STAR voting may address two critical problems in our voting system: the elimination of the third candidate spoiler effect; and improving confidence that each of us can express our true preference without remorse and fear of wasting the vote." - Tom Bowerman

* "If you want action on the issues that you and most Oregonians care about most, I encourage you to vote for an upgrade to the STAR Voting system." - Chris Edwards

* "STAR Voting is simple. It always elects the majority favorite between the two highest rated candidates in every race in which it is used." - Clay Shentrup

* “As a mathematician, I am deeply impressed by STAR Voting's ability to incentivize honest voting. It will be a powerful force in dissolving the stranglehold that the current 2-party system has on our political landscape, and I for one am ecstatic about that more representative future.” -Emily Dempsey, Portland-based mathematician and computer scientist

* "I support STAR Voting because it creates a more level playing field for candidates and will respect the will of the voters." -Julia DeGraw, community organizer and former candidate for PDX City Council

* "Of the dozens of voting methods I know about, STAR Voting is one of the very best for single-winner political elections." and "[STAR Voting] is undeniably a top-shelf election method, and arguably the best out of all the ones I tested." -Jameson Quinn, Vice-Chair and Director at the Center For Election Science and statistics Ph.D. candidate at Harvard University where his research focuses on voting systems

* I encourage you to try STAR Voting for yourself by creating a poll or trying an existing one at http://star.vote - whether you are deciding where to go to lunch or who should make our most critical civic decisions, STAR Voting will get the job done." - Mark Frohnmayer, founder of the Equal Vote Coalition and founder of Arcimoto

* “I love the ability of STAR Voting to express a preference for multiple candidates. I don’t have to think about who has the most money or worry if voting for my favorite candidate will split the vote." -James Barbur

* “Until voters can vote their conscience it's not a democracy!” - Sara Wolk

* “STAR Voting is the first step in giving the power of government back to the people and out of the hands of lobbying interests.” - Ryan Hassan

* “Choosing between the "lesser-of-two-evils" is no longer satisfactory for a nation as diverse - in culture, as well as landscape - as The United States.” - Dalton Zerlan

* “I endorse STAR voting because I believe the two-party system is corrupt and a threat to our democracy.” - Mont Chris Hubbard

* "STAR Voting is the best option available that allows voters to vote their conscience and know their vote will count in determining the winner even if their favorite can’t win." - Jas Davis

* "I whole-heartedly endorse the adoption of STAR Voting as the most easily-implemented, innovative, and cost-effective preference voting system currently available. It is the only widely-considered top-tier voting alternative that truly lets people vote their conscience, fully eliminates the spoiler effect and guarantees a winner preferred by the majority of voters. Most simply, it let’s people vote for their favorite candidate and still have their vote go to their second or third favorite candidate if their favorite can’t win." - Jas Davis

Words of Encouragement from groups which haven't endorsed yet:

* "[We] think STAR voting is worth testing – we think it’s an interesting approach." and "we support [STAR] getting some actual election experience." -Sightline Institute

* "I don't see bullet voting as a strategic incentive with STAR voting." and "FairVote is neutral on STAR voting in governmental elections" -Rob Richie of FairVote, the group advocating for Ranked Choice Voting