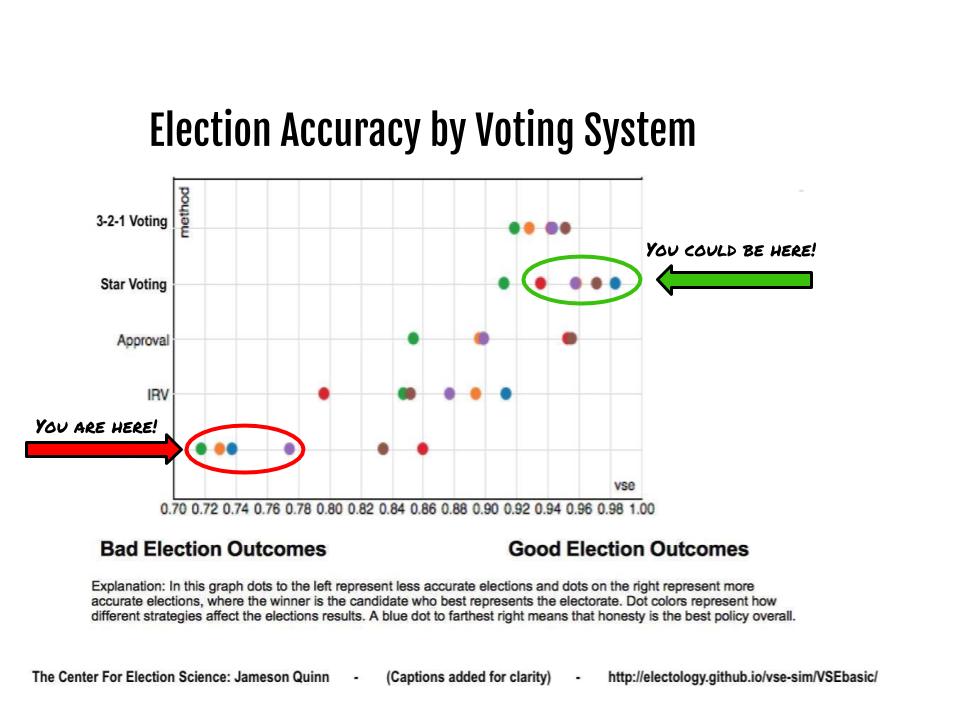 There are a number of tools that voting scientists use to answer these questions and like all good science lovers we advocate taking a close look from multiple perspectives. For evaluating the accuracy of individual elections one approach is to find the "Condorcet Winner," the candidate who would beat all others in a head to head race. For comparing accuracy of multiple elections most voting scientists turn to election simulations to measure accuracy. "Bayesian Regret" is one such model and the Yee simulations are another. One of the most exciting and thorough is "Voter Satisfaction Efficiency". These simulations can be an invaluable addition to the data we can collect from real world elections.

Real world, empirical election data is also a critical source of information. Unfortunately, the basic chose-one-only style ballot doesn't give us much data to go on. These ballots are not expressive enough to collect the voters' full opinions, and we have no way of knowing if the votes cast were honest or dishonest. We also have no way of knowing if factors like vote splitting and the Spoiler Effect distorted the election outcome. Simply determining the candidate who got the most votes only goes so far.

For assessing voting methods with less expressive ballots, pre voting day polling and exit polls can be a valuable addition to election results and ballot data. In many cases ratings are used in this kind of polling because a rating is able to collect the kind of data needed to asses less expressive ballot data and election results. Nonetheless we can draw firm conclusions from the data, polling, and other kinds of observation and trends.

For example, failed elections due to vote splitting and the Spoiler Effect can be glaringly obvious. The 2000 presidential election with George Bush Sr. (Republican) vs Al Gore (Democrat) and Ralph Nader (Green Party) is a classic example, even if we ignore the electoral collage. In that election, a majority of voters were from the Left end of the political spectrum. Based on polling we can safely conclude that many Green Party voters would have preferred Gore, and if we had a more expressive voting system, the election would have elected Gore. In 1996 the same scenario happened in reverse where the Republican Bob Dole was likely the candidate preferred overall, but he lost the election after voters on the Right were split between Bob Dole and Ross Perot.

Among voting scientists the fact that our choose-one-only voting method is wildly inaccurate with more candidates in the race is essentially a consensus. 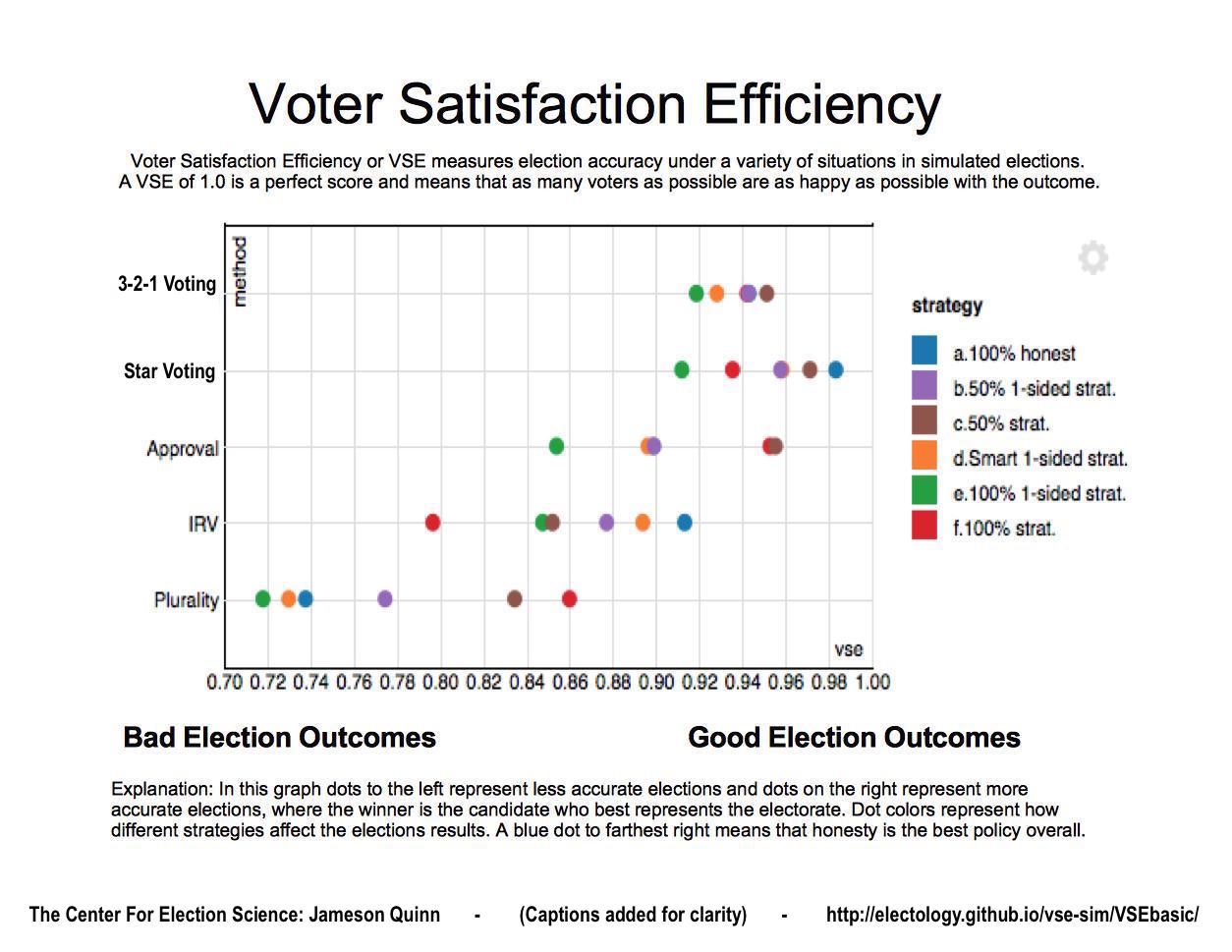 Voter Satisfaction Efficiency makes a strong case for STAR Voting. (STAR is referred to as Score Runoff Voting or SRV in the study.) In VSE, STAR topped the charts, coming in as more accurate than all other voting systems that are being seriously advocated for, many of them by large margins. The only voting system that was close to on par was a Condorcet Method called Ranked Pairs which had previously set the bar for accuracy but which is too complex to be viable in real world elections.

Another problem is that there are a few situations where some people may argue that the Condorcet winner didn't actually have the most support. Advocates of Instant Runoff Voting (IRV) often argue this to defend the results of a recent Burlington Vermont IRV election which didn't elect the candidate who was preferred over all others. In order to make that argument convincingly we would need to know more than just voters' preference orders, we would need to know how much each voter liked each candidate.

In ranked ballot systems there's no way to know if a voter actually liked their second choice. Second choice could mean full support if a voter really loves more than one candidate. Conversely a voter's second choice may be a candidate who they strongly dislike, but who is better than their worst case scenario.

STAR Voting would usually elect the Condorcet winner, but if it doesn't, there is a convincing case to be made for why another candidate actually had more support and better represented the people.