Changing How We Vote 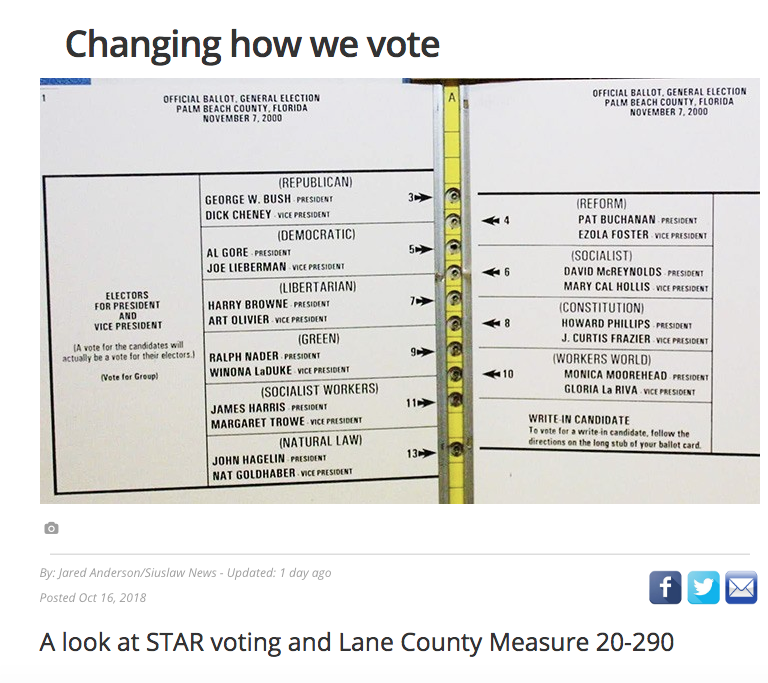 Oct. 17, 2018 — The future of voting in Lane County in non-partisan elections will be decided this November as electors decide on Measure 20-290.

The question put forth to voters is: “Shall Lane County amend Charter to adopt ‘Score then Automatic Runoff’ method for counting candidate votes in local office races?”

The measure would look to affect two aspects of Lane County voting: Primaries and how citizens vote.

“I think it’s a powerful, revolutionary first step,” Hallie Roberts, campaign manager for STAR voting, told the Siuslaw News in June. “I don’t think it’s a cure-all patch for everything, but I think it’s absolutely a step in the right direction for our voting method. Whatever changes need to be made to go along side of it, we can address those one at a time.”

Roberts believed STAR would not be the end-all-be-all to fix voting America, but rather acting as a first step to a broader conversation in how America elects its officials.

While the measure would only affect non-partisan races held in Lane County — city races, like mayoral candidates, would not be affected — Roberts hopes that a successful rollout of the program would lead to a broad adoption of STAR throughout the state, revolutionizing how Oregonians vote.

Serving Western Lane County since 1890. Read the latest news and stories of interest from the Florence area.