A renaissance in voting reform

The version of Ranked Choice Voting in use today was invented in 1870 as a simplification that made tabulation of ranked ballots easier and faster. Previously, when counting ranked ballots, people would look at all the rankings to determine the candidate who was preferred over all others in head to head match-ups. While the old way was (and is) very accurate, it was hard to count.

In comparison the Instant Runoff Method was a breeze. Rather than counting all the rankings, candidates would be eliminated in tournament style rounds, and as candidates were eliminated votes would transfer from one to the other. Ballots would shuffle from one stack to the next, and at the end the candidate with the tallest stack of ballots was the winner.

It wasn't perfect, but the gains in logistical viability were considered worth it by many. By the early 1900s what we now know as Ranked Choice Voting had caught on, and was in use in countries like Australia and Ireland, as well as a few cities in the US.

The age of computers changed everything. Modern simulations, modeling, and statistics revealed new information on exactly how pervasive known issues and unrepresentative outcomes with Ranked Choice actually were. (Votes can backfire in 15% or more of competitive elections with 3 or more candidates.) For decades RCV (and STV, the multi-winner version,) were repealed in more places than they were adopted, and the Choose-One voting method reigned, despite the fact that every single election science study showed that it was the absolute worst.

Many reformers, academics, and researchers started advocating for alternative voting methods like Approval and Score Voting, as these methods didn't waste votes and consistently outperformed RCV, especially in competitive races. In particular, studies from the year 2000 had shown that a score voting primary followed by a top-two general election outperformed all other methods tested. But there were drawbacks to those methods as well, and neither side was willing to compromise with so much at stake. The reform community was divided, and the result was that the movement floundered. On one side were those who liked ranking methods, on the other were preference voting fans. Enter STAR Voting.

In 2014 at the Equal Vote Conference in Eugene, Oregon, STAR Voting was invented. A hybrid of the previous proposals, STAR Voting delivers on the goals of reformers on both sides while addressing valid concerns with the older proposals. The 5 star ballot allows voters to show their level of support and allowed the ballots to be tallied using simple addition. The Instant Runoff ensured that even if a voters favorites couldn't win, their vote would still make a difference. It was a breakthrough!

As predicted, studies found that the new method topped the charts for both accurate representative outcomes, and also resilience to strategic voting. Finally, a win-win proposal that everyone could get behind!

RCV and STAR have a lot in common:  Only one election is needed, primaries are optional. Both are user friendly. Both can be used for single winner, multi-winner, or proportional representation elections ...

… That said, there are significant differences. 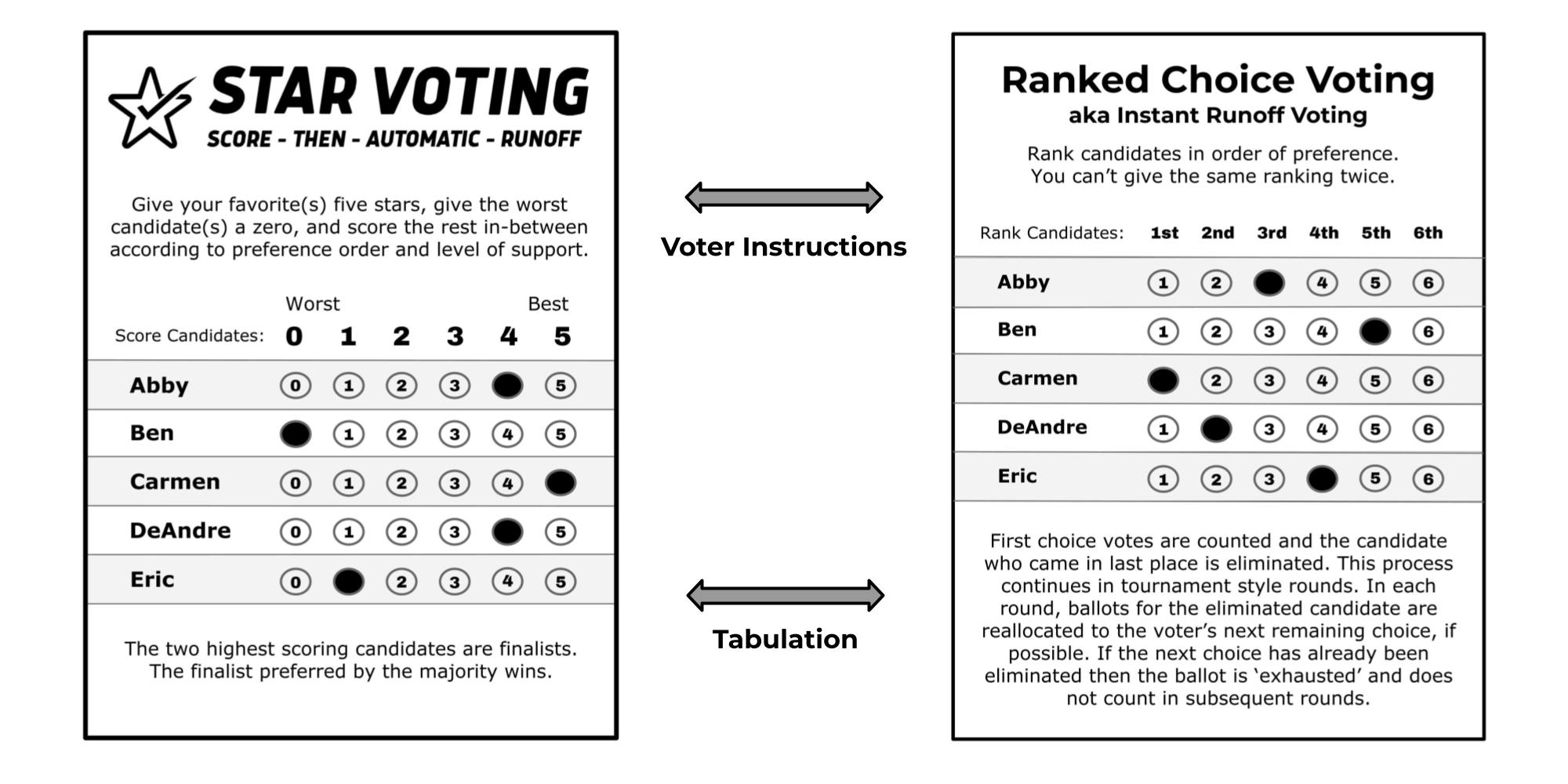 Technically "Ranked Choice Voting" or RCV is an umbrella term for any number of ranked ballot voting methods, however in practice RCV is Instant Runoff Voting, the method discussed below. STAR Voting is often referred to as RCV 2.0.

#2: Two Rounds vs Many Rounds of Tabulation:

Both RCV and STAR use built-in runoff rounds to determine the winner, and voters only need to vote once. STAR voting has two rounds of tabulation with a scoring round and an automatic runoff, RCV may have as many runoffs as there are candidates, minus one.

#3: Majority preferred winners vs a majority of remaining ballots:

In order to guarantee majority preferred winners, voting methods need to narrow it down to the top 2 finalists. RCV and STAR Voting use different methods for determining these finalists.

#4: Equity and Fighting Implicit Bias in the Vote:

Voting methods are not created equal. Studies show that the current Choose-One Plurality system only elects the correct winner in the around 75% or 80% of elections. Ranked Choice does better with around 85%-90%. When you consider that many elections are not competitive and that any system will get it right if there are only 2 candidates in the race, that's actually pretty bad odds. STAR Voting tops the charts with 98% accuracy, even in competitive fields with many candidates.

And when elections fail they tend to favor some types of voters and candidates over others.

Most voting methods are "precinct summable," including Choose-One Plurality voting, STAR Voting, and all voting methods that are tallied with addition. In an election if you can tally any subset of the ballots separately and then add the totals for each set together to get the correct winner, the voting method is precinct summable. This is a key criteria that is required in order to allow ballots to be tallied (and audited) at the local or precinct level. It's also a requirement for ensuring that election officials can begin reporting meaningful preliminary results as ballots come in, without having to wait until all ballots are in hand.

Ranked Choice Voting, (specifically the Instant Runoff version that's in use widely and is the focus of most advocacy,) is not summable. If you tallied the ballots from each precinct separately and then added them together, you could end up with a different winner than you would have gotten if you tallied the results all together. In RCV, physical ballots or ballot data needs to be centralized in one location, and all ballots need to be in hand before the elimination rounds can proceed. This often results in very long delays from voting day until election results can be reported. Centralizing ballots also increases security risks for elections and makes auditing and recounting more difficult and more expensive.

Due to the fact that not all rankings will ultimately be tallied, in Ranked Choice Voting it's not enough to know how many voters ranked each candidate at one level. This is because not all rankings will ultimately counted, and the election needs to track which specific ballot a ranking came from in order to know who that vote should transfer to as the ballots are processed through the elimination rounds.

The future of voting reform?

Voting reform is the keystone. A single cause with the potential to empower us to be effective on every other issue we care about. But change is scary. If we are going to put in the work to adopt a whole new voting method we might as well get it right.

1.) “Monotonicity failures [spoilers] in three-candidate IRV elections may be much more prevalent than widely presumed (results suggest a lower bound estimate of 15% for competitive elections).” Frequency of monotonicity failure under Instant Runoff Voting: Estimates based on a spatial model of elections. By Joseph T Ornstein, University of Michigan, Dept. of Political Science and Robert Z. Norman, Dartmouth College, Dept. of Mathematics, 2013.

2.) "The rate of ballot exhaustion was high in each election, ranging 9.6%–27.1%." Ballot (and voter) “exhaustion” under Instant Runoff Voting: An examination of four ranked-choice elections. By Craig M. Burnett, University of North Carolina, and Vladimir Kogan, Ohio State University, USA. 2015.

3.) "We find that RCV helps reduce the substantial drop in voter participation that commonly occurs between primary and runoff elections. Otherwise RCV does not appear to have a strong impact on voter turnout and ballot completion. In a case study of Minneapolis we find similar levels of socioeconomic and racial disparities in voter participation in plurality and RCV elections." Voter Participation with Ranked Choice Voting in the United States. By David C. Kimball and Joseph Anthony, Department of Political Science University of Missouri‐St. Louis St. Louis, MO. 2016.

4. "Drawing on previous research conducted by the Maine Policy Institute, McCarty examined 98 RCV elections from 2006 to 2019 and found that, on average, 10.8 percent of ballots casted were considered exhausted by the final round." Expert report reveals weaknesses of RCV. By Isabelle Christie. 2020

6.) Voter Satisfaction Efficiency (VSE) studies by Dr Jameson Quinn Phd. At the time this study was released Quinn was Vice Chair for the Center for Election Science. Quinn is now on the board of the Equal Vote Coalition http://electionscience.github.io/vse-sim/vse.html

7.) Election Accuracy. A comprehensive list and overview of studies, sources, and citations comparing voting methods including RCV and STAR. http://starvoting.us/accuracy