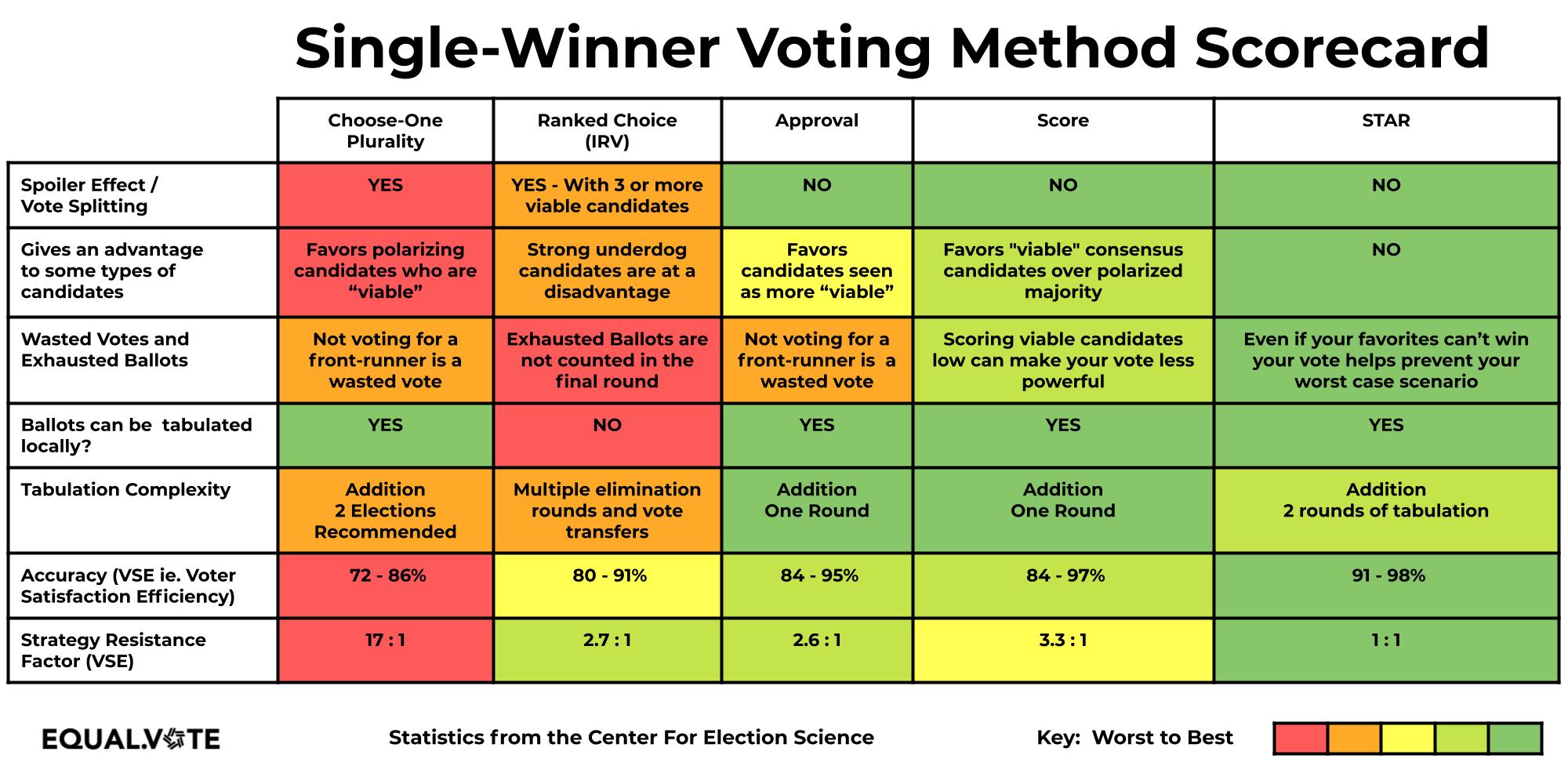 Our current voting method, Plurality or First-Past-The-Post, is only fair and accurate if there are two candidates in the race. We can do better! But what’s the best alternative? Here we present the pros and cons of four options in detail. They are not necessarily the best four options, but they are the leading voting methods under consideration for updating our elections.

Voters use a 5 star ballot and score candidates from 0-5. Candidates left blank receive a 0. Voters may give multiple candidates the same scores.

STAR Voting takes one ballot and counts it in two different ways. The first round adds up all the scores and determines the two highest scoring candidates. The second round looks at each voter's preference order and determines the candidate who was preferred by more voters. Think of it like quality and quantity- Rather than having to choose, STAR maximizes both.

STAR Voting is a hybrid of Score and Instant Runoff Voting.

Note: RCV technically refers to all voting systems that use ranking, but in the USA RCV is often used to refer to a specific single winner version, IRV, and sometimes it’s multi winner version, STV. We discuss IRV here because it’s the most popular despite the fact that it’s the least accurate version of RCV.

Check a box for as many candidates as you approve. The candidate with the most approval votes wins.

Voters give each candidate a score, the candidate with the highest total wins.

1.) “[IRV] can cause spoilers in up to 1 in 5 elections or worse when there are more candidates according to expert analysis.” Frequency of monotonicity failure under Instant Runoff Voting: Estimates based on a spatial model of elections. By Joseph T Ornstein, University of Michigan, Dept. of Political Science and Robert Z. Norman, Dartmouth College, Dept. of Mathematics https://www.researchgate.net/publication/258164743_Frequency_of_monotonicity_failure_under_Instant_Runoff_Voting_Estimates_based_on_a_spatial_model_of_elections

3.) Voter Participation with Ranked Choice Voting in the United States. By David C. Kimball and Joseph Anthony, Department of Political Science University of Missouri‐St. Louis St. Louis, MO. "We find that RCV helps reduce the substantial drop in voter participation that commonly occurs between primary and runoff elections. Otherwise RCV does not appear to have a strong impact on voter turnout and ballot completion. In a case study of Minneapolis we find similar levels of socioeconomic and racial disparities in voter participation in plurality and RCV elections." https://www.umsl.edu/~kimballd/KimballRCV.pdf

4. Expert report reveals weaknesses of RCV. By Isabelle Christie. "Drawing on previous research conducted by the Maine Policy Institute, McCarty examined 98 RCV elections from 2006 to 2019 and found that, on average, 10.8 percent of ballots casted were considered exhausted by the final round."

6.) Voter Satisfaction Efficiency (VSE) studies by Dr Jameson Quinn Phd. At the time this study was released Quinn was Vice Chair for the Center for Election Science. Quinn is now on the board of the Equal Vote Coalition http://electionscience.github.io/vse-sim/vse.html