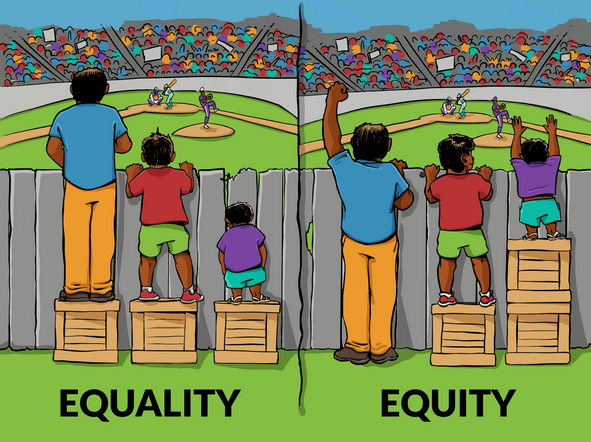 Single winner elections are only ideal for some situations:
Basic STAR Voting is a great voting method for determining a single winner that best represents the electorate as a whole. It's ideal for electing offices like our county commissioners, mayor, governor and also for higher offices like senators and our president, but what if we are trying to elect a council with multiple members to better represent the people as a whole?

The Round Table Model:
Governing by council is probably one of the oldest methods in existence and the round table model can mean that diverse factions within the population can still have a voice, even if they don't have a majority. The idea is that if there are 4 seats on the council a candidate representing a 1/4 of the population should have a seat at the table.

District Based Equal Representation:
Splitting the electorate into 4 districts (for example,) and electing one representative from each is a simple way to accomplish fair geographical representation. District based elections are well suited for situations where the council will be focused on local issues, and less on bigger picture ideological decision making. Districts are an especially good fit for situations where different ideological factions are clustered in different areas because then the district representative can also represent their demographic.

Districts have a lot of advantages, but single winner districts aren't ideal for every situation. For example let's consider a city where a third of the people belong to a minor political party or cultural group, but where there is a strong majority group who is evenly spread out around the city. With a district based election method the majority party or group would win every single seat, and that 1/3 of the population would be left with nothing. Since there are 4 seats up for election in this example, 1/4 of the population should be enough for them to earn representation, but that doesn't happen here.

Another major problem with district based representation is gerrymandering. There are a number of ways to prevent gerrymandering without getting rid of districts altogether (such as measuring efficiency gap, looking at district compactness, and having independent re-districting boards,) but gerrymandering is an important concern to take into account and safeguard against.

Lastly some geographical areas or groups just can't or shouldn't be subdivided. Neighborhood associations and corporate boards are two examples where single-winner, district based elections aren't an option.

There are a number of ways to tabulate a 5 star ballot to produce a proportional result. The leading proportional 5 star voting methods all use the same 5 star ballot as single winner STAR Voting. The algorithms which can be used are all shorter and simpler than that used by Single Transferable Vote and do not waste votes. Proportional STAR pairs well with single winner STAR Voting, so voters can have accurate elections for both single and multi-winner races using the same ballot.

Are Oregon's current multi-winner elections proportional?
No. There are a few different types of multi-winner and at-large elections used in Oregon, but none of them offer proportional representation. The problem is that with these types of elections the majority wins every single seat and everyone else ends up with no representation at all. This is especially true with our current "Choose-One-Only" voting method. To make matters even worse, at-large and multi-winner versions of our current plurality systems are actually worse than single winner plurality voting where at least each district is accurately represented.

Portland's City Council is an example of an unrepresentative at-large multi-winner election. Setting aside concerns about the Commissioner/Bureau system, many people in Portland are concerned that almost all of the City Council lives in West Portland and in affluent neighborhoods. This leaves East Portland largely unrepresented and issues that are critical to East Portland residents can easily fall through the cracks. When there is a problem these voters don't have a representative they can hold directly accountable.


How should we reform City of Portland elections?
The 2018 ballot initiative for Multnomah County elections specifically and despite demand to reform City of Portland elections we deliberately decided to start by reforming Multnomah and Lane County elections. Our county elections are already non-partisan and single-winner which makes them a good foundation for future reforms that are more complex or that require bigger changes. Passing STAR Voting in county elections allows us to focus on educating people about STAR Voting itself without getting derailed trying to explain complex and controversial election methods used elsewhere.

The Equal Vote Coalition has been doing a lot of outreach and networking in the community for our current ballot initiative and we have made sure to use this opportunity to talk with people who have strong feelings about how to reform City of Portland. What we have heard unanimously is that this is a decision that Portland's diverse communities want to have a voice in. A number of people are advocating for a switch to single-winner districts. Others are advocating multi-member districts, proportional representation, or or a combination of both.

We believe that any of these options with a star ballot would lead to much better representation, and we plan to help facilitate that discussion and include everyone who would like to have a seat at the table. Any of the above options meet our 5 core criteria for voting systems: Equality, Accuracy, Honesty, Expressiveness, and Simplicity. Each option has pros and cons which are worth considering carefully. We plan to work together with the communities who will be directly affected to find the best option for each election.

If you or your group would like to be included in this process or if you have feedback on how we should reforming other Oregon elections please send us an email at pdx@equal.vote. We're compiling an email list specifically for this and we can let you know if there are events or opportunities to work on this or other voting reforms in your area. If you know of opportunities or efforts we should be a part of please let us know as well!


Why not use other PR systems?
Much of Europe uses Party List PR systems where voters essentially vote a party line. Here in the USA nearly 1/2 of voters don't identify with a political party and so those voters wouldn't be well represented by a party list system. Proportional Representation in general does have a positive impact encouraging parties to form that better represent the political spectrum, but if PR was just adopted locally it's doubtful that effect would be significant enough to heal our polarized political duopoly. Because the two parties hold all the political power in the USA, passing a system nationally that would re-distribute that power that would be next to impossible because doing so would require a super majority to change the constitution. Adopting PR nationally is also not logistically viable in our huge country because the ballots are not precinct summable. For these reason we don't see Party List PR as a viable option locally or nationally. Non-partisan voters need fair representation too. The good news is that single-winner STAR Voting would also encourage and allow the formation of more representative political parties, AND it's already legal and constitutionally viable for national elections!

Australia and Ireland use Single Transferable Vote (STV) for parliamentary elections. The more expressive ranked ballot makes this a better option, but PR with a star ballot takes that a few steps further. A 5 star ballot shows not only a voter's preferences, but also how much or little they like each candidate. Star ballots can be counted using addition instead of algebra, which allows for Proportional STAR Voting to accomplish the exact same thing with a much simpler algorithm. STV's runoff method is based on IRV and suffers from the same flaw in the elimination process where some rankings that should have been counted can be ignored. In contrast, Proportional STAR Voting allows all the data to be counted in each round so that no votes are wasted. More data collected and more data used means more accurate results.

Proportional Representation is the cutting edge of voting science and we are excited to be on the forefront.

The Equal Vote Coalition is currently convening a team of local and international voting scientists and researchers to evaluate the proposals on the table, to develop better methods for comparing and testing proportional voting methods, and to consider and study new proposals and innovations in the field. The goal is to definitively determine the proportional method that is the most equitable, accurate, fair, simple, and resistant to strategic voting.

For more information or to get involved with the committee studying 5 Star Proportional Representation please email: sara@equal.vote