Readers respond: STAR voting is the change we need

Readers respond: STAR voting is the change we need 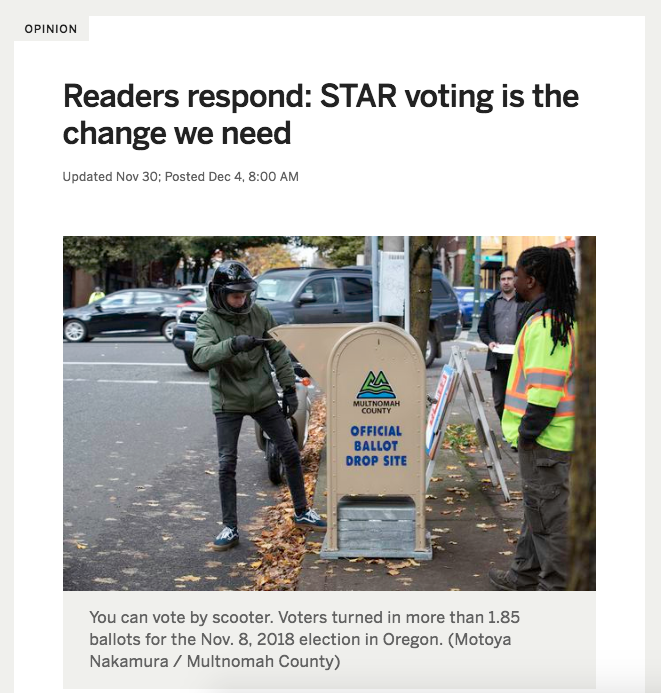 Midterm Election Day has passed. Here in Lane County, Measure 20-290 to amend our charter by adopting Score Then Automatic Runoff voting failed. This measure needed only a little more than a 2 percent increase to pass. People fear change, but I believe the real reason 20-290 didn’t pass is a lack of information disseminated among the electorate and misinformation from others, despite the great efforts made by volunteers and petitioners to inform voters. Out of the 181,925 ballets case in Lane County only 158,490 voted on this measure. That’s 23,435 votes of apparently undecided, poorly informed voters who might have tipped the scale in favor of STAR if they’d had access to unbiased information. STAR is not Ranked Choice Voting, it is a new idea. It’s a way to address many of the problems of our current plurality voting system, in which you can vote as long as you belong to one of the two majority political parties. STAR is one vote per person, but no more voting for the lesser of two evils.

Yes, it’s new and different. So was voting by mail a few years ago. I encourage you to educate yourselves. Let’s put STAR to a statewide vote next go around, then the whole nation.