Q: What if I already signed a petition like this?

A: This petition has been circulating since August 1st, 2019. If you signed the STAR Voting for Lane County petition after that please do not sign again.

If you signed a STAR Voting for Lane County petition before 2018, this is a new and different initiative, and you should sign again.

Q: Where can I get a normal signature sheet I can circulate in person?

A: The normal signature sheets for in person canvassing need to be printed double sided and correctly formatted in order to be valid, so we don't have them available to download, but we will happily mail you a complete canvassing packet, which includes canvasser instructions, the legal text, and some signature sheets. If you'd like to take a clipboard to work, or feel you can safely circulate it please fill out the form below to request a Lane County Canvassing Packet.
REQUEST LANE COUNTY CANVASSING PACKET

How do elections in Lane County currently work?:

Q: How does the current system work for local elections?:

In the November election voters are given the choice of only the one or two candidates who made it through the spring primary.

Q: How do ballot initiatives work?

A: The ballot initiative process is a path for everyday citizens to write laws and get them passed, if the voters approve. First, a group of citizens (the Chief Petitioners) draft the legal text (with the help of a lawyer if needed,) and submit it to the appropriate elections division along with other paperwork. In this case Lane County Elections. County Elections then looks it over, checks it for constitutionality and legality, drafts a Ballot Title, which includes an official summary of the legal text, and ultimately approves it for circulation once everything is in order. For county and statewide initiatives campaigns have two years to collect enough signatures to qualify the initiative to appear on the ballot in the following election. If over 50% of the voter vote yes the initiative becomes law.

Ballot initiatives are a lot of work, but they are a powerful tool for grassroots reform because they don't require leadership or approval from legislators.

Q: How would STAR Voting work for Lane County elections?:

A: STAR stands for "Score Then Automatic Runoff," and also refers to the fact that voters can score any or all candidates on a scale of 0 to 5 (0 for no support and 5 for the most support) similar to giving star ratings to a movie or restaurant.

With STAR Voting there is no need for a primary election, so voters would vote only once, in November. This makes for a shorter campaign season focused on the summer and fall when people are paying more attention. It also makes it easier for candidates who don't have big donors to run a viable campaign.

The ballot would still be nonpartisan, but instead of being limited to picking just one candidate, you can give a score to any or all candidates -- even giving the same score to two or more candidates you prefer equally. (Giving no score is counted as a zero.)

You only need to vote once, and ballots are counted in two rounds. First the scores for each candidate are added up across all of the ballots, and the two candidates with the highest total scores become "finalists." This shows they have relatively high and broad support from the voters. Second, the same ballots are used to determine which of those two finalist candidates was preferred by the most voters -- this step is a simple majority vote with your vote going to the finalist you gave a higher score to. Each ballot counts as one vote.

A: All county races would have bubbles next to each candidates for you to mark your scores from 0-5. Instructions on how to fill in a 5 star ballot would also be included on the ballot itself. Here's an example of a filled out 5 star ballot: 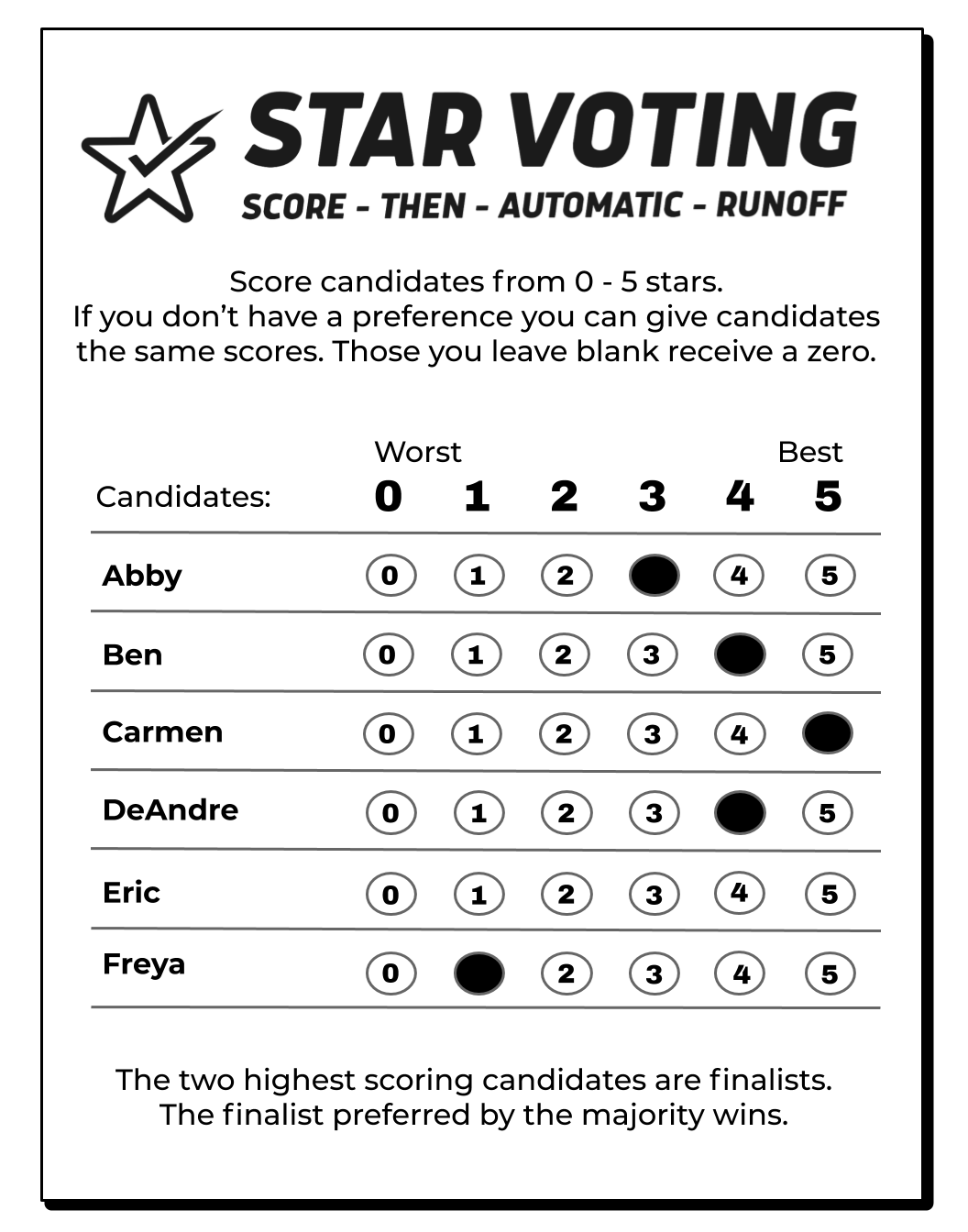 Until we adopt STAR Voting in other jurisdictions, elections for city, state, and national offices would all remain as they are currently.

Q: Would this effect local ballot initiatives too or just candidates?

A: STAR Voting would only be used for candidate races for Lane County offices. Ballot initiatives would remain yes/no.

Q: Would STAR Voting cost money or save money?

A: For the first year of implementation STAR Voting would represent an additional expense, but because it eliminates the primary, it would pay for itself and then begin to save money within a few election cycles.

Initial adoption of STAR Voting would require a software upgrade for our current ballot scanners and tabulators. No new equipment would need to be purchased but the upgrade would need to be officially certified, which costs money. Additionally there would be some cost associated with educational materials to ensure that voters understand the new system. We estimate those costs to be under 100k dollars in the first year only. If Eugene adopts STAR Voting first this cost likely be cut in 1/2.