When does voting begin and end?

The Independent Party of Oregon (IPO) 2020 May Primary Election will be held from April 28th - May 12th. Sign up to be notified when voting begins here.

Who is eligible to vote?

The Independent Party of Oregon (IPO) has opened the party's 2020 primary election to the state's 900,000 non-affiliated voters, in addition to the Independent party's 125,000 members registered by March 1st, 2020.

Are candidates from any political party eligible to run for the Independent Party Nomination?

Candidates running for statewide office from all parties as well as non-affiliated candidates are eligible. Candidates may be nominated by collecting 50 signatures of support from party members or may opt to pay a filing fee.

To see the status of all candidate filings, please visit the IPO candidates page.

What happens if a candidate from another party wins the Independent Party Primary? What about the sore loser law?

Candidates who lost the primary election of their own party are not eligible to win ballot access as an Independent in Oregon. If a candidate wins both their own primary and the IPO primary they will be cross nominated by both parties.

What is a Presidential Preference Poll?

The Presidential Preference Poll is not a binding election and will not determine ballot access for the general election to presidential candidates.

How many voters are eligible?

Over 1.2 million votes in Oregon are currently registered Independent or are Non-Affiliated and are eligible to vote in the IPO primary, representing the largest voting block in Oregon, larger than either major party.

What voting methods and election systems have been used by the Independent Party for primary elections?

From 2011-2014 the IPO also made history by using Approval Voting for the primary. In 2016 and 2018 the IPO qualified as a major party, which meant that they no longer officiated their own elections and had to go back to ‘Choose-One’ Plurality Voting. This year the IPO primary will use STAR Voting.

What is the difference between an Independent and a non-affiliated voter in Oregon?

The Independent Party of Oregon was formed in 2007 in response to legislative changes that made it more difficult to run for public office as a non-affiliated candidate and that changed the label for candidates who file by petition from 'independent' to 'non-affiliated'.

How big is the Independent Party of Oregon?

In 2016 and 2018, IPO was recognized as a major political party by virtue of hitting a total membership equal to 5% of all registered voters. As a major party, IPO participated in the statewide primary election conducted by Oregon Counties. Despite adding more than 15,000 members since 2016, the party has reverted to a minor party and is again conducting its own nominations for 2020.

More than 50,000 Oregonians participated in the 2016 IPO primary election. Past elections conducted by the party have averaged around 2,500 participants.

How will the election be conducted and where do I get my ballot?

Due to concerns regarding volunteer safety in light of Covid-19, the election will be entirely conducted online. Voters will input their voter information and submit their identification documents for credentialing in order to receive their ballot. Sign up to be notified when voting begins here. Once credentialed, voters will receive their ballot link via email, fill it out, and submit their votes.

Who will be officiating the IPO Primary this year?

The 2020 IPO primary will be officiated by STAR Vote Elections, a project from the Equal Vote Coalition.

What is STAR Voting and how does it work?

STAR Voting allows voters to express their preference order between candidates as well as their level of support for each. You may give candidates the same score if you don’t have a preference between them and you may leave candidates you don’t support blank. 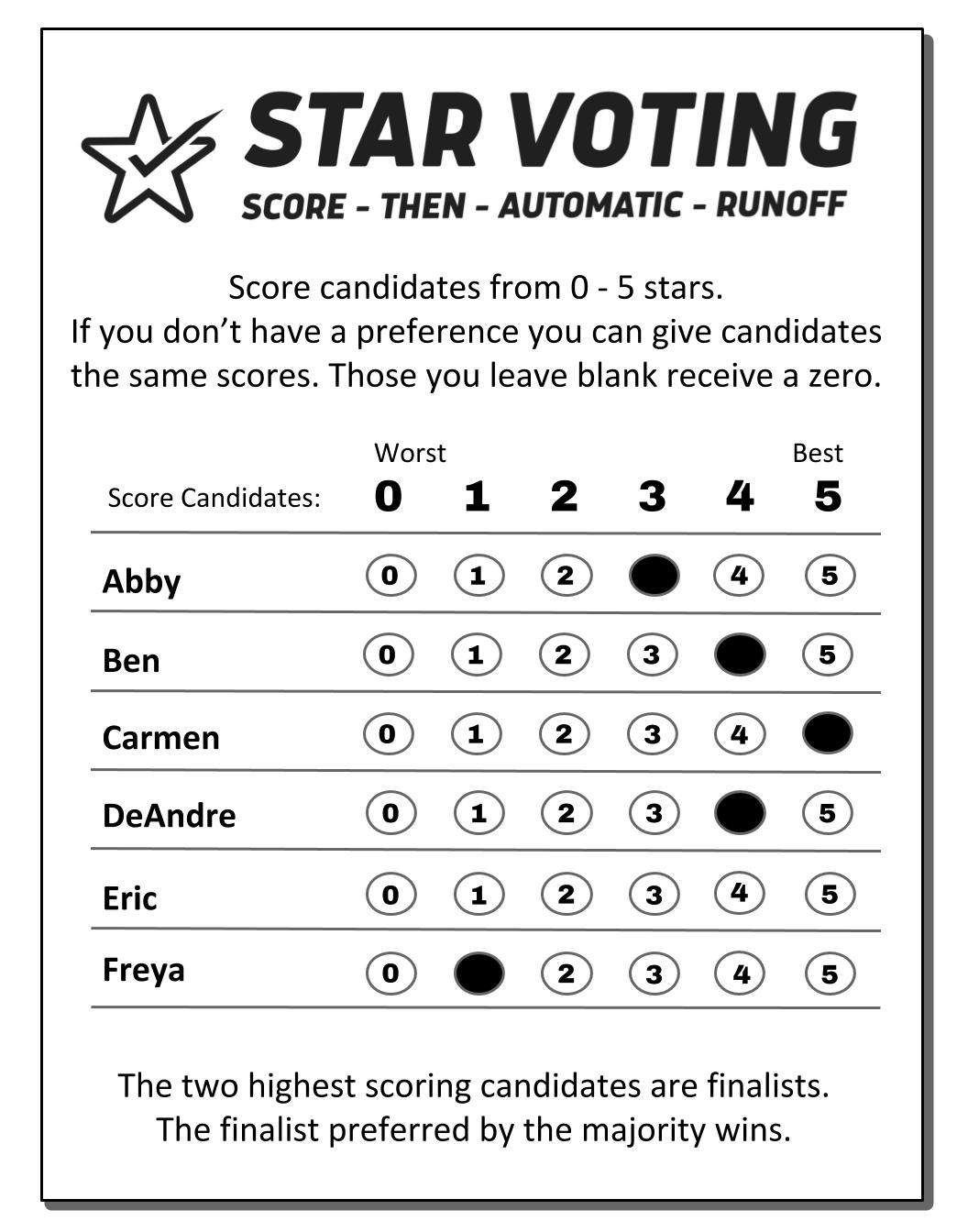 With STAR Voting the scoring round is 0-5, but the runoff is binary, much like a normal top 2 general election. In the runoff, your ballot is your one vote, and your vote goes to the finalist you prefer.

STAR Voting eliminates vote splitting and the spoiler effect, so it’s safe to vote your conscience, your vote is never wasted, and you don’t need to worry about electability. 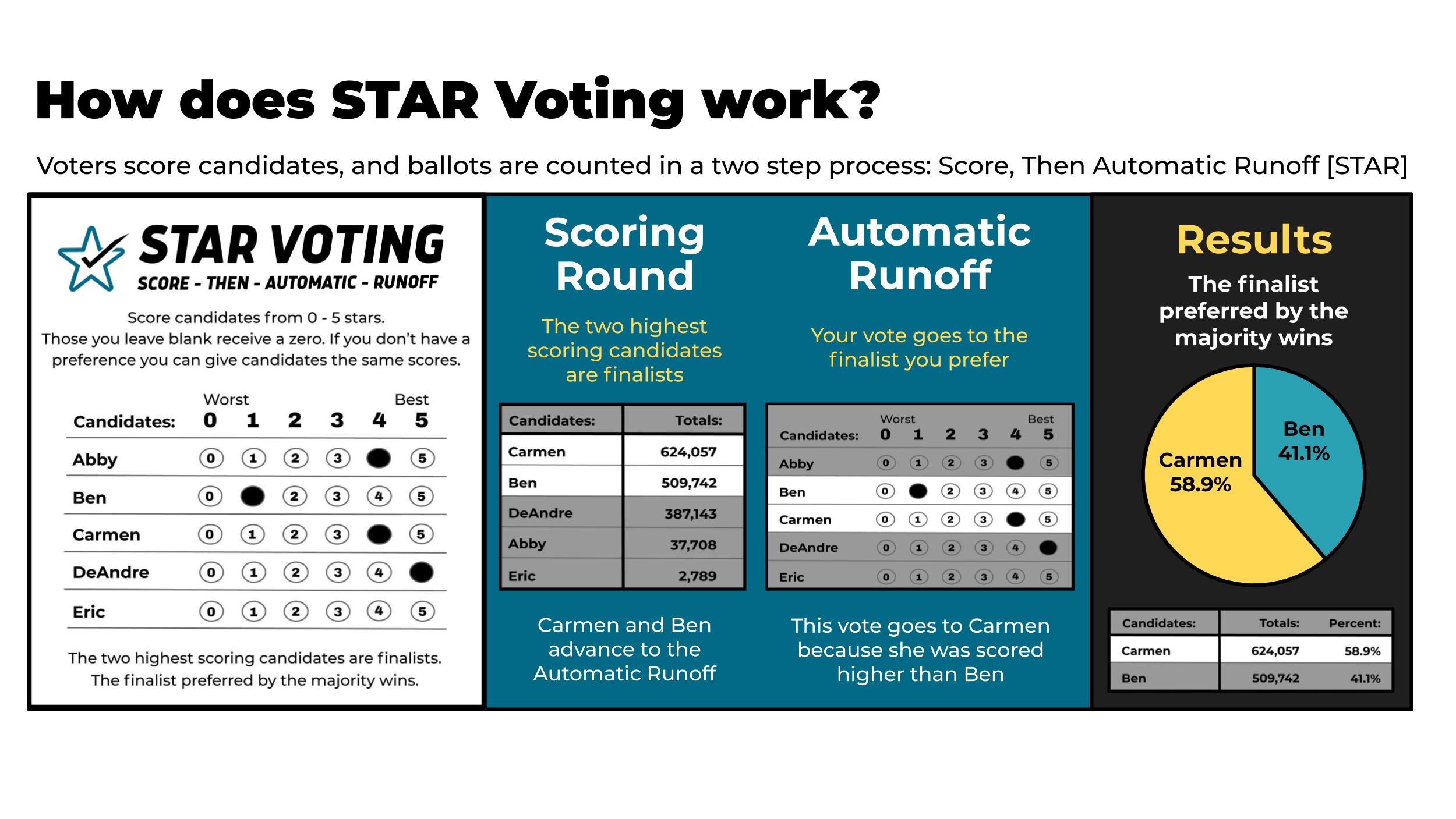 Why do we need STAR Voting?

• STAR Voting eliminates vote splitting and the spoiler effect, so it produces winners which accurately represent the electorate, even with large fields of candidates.

• STAR Voting fights polarization and encourages more positive campaigning. Candidates have an incentive to reach out to all voters.

• STAR Voting eliminates the need for low turnout primaries and long drawn out election cycles. In the cases of most local elections there is no need for a primary and general election.

• STAR Voting helps combat the influence of money in politics by empowering voters to vote for underdog candidates they prefer, not the big money candidates they think can win. In elections where primaries can be eliminated STAR Voting makes it more affordable to run for office.

• STAR Voting offers a fully constitutional and logistically viable model for reform which can save money while maintaining or improving on security protocols and auditing best practices.

Why don’t we use STAR Voting for all elections?

STAR Voting is a nationally viable proposal which can be used for single-winner, (as seen in the IPO primary,) as well as multi-winner, and multi-winner proportional representation elections. It’s been proposed for adoption on the local and statewide level around the country and has a growing international movement.

To sign up to join the email list for STAR Voting and to find out how to get involved go to http://starvoting.us/sign_up

I want to use STAR Voting for another vote or election. How do I do that?

If you know of an organization, event, or group who could use STAR Voting for internal elections, polling, or decision making, the star.vote web app is a free and accessible tool which allows users to officiate your own elections and voting quickly and easily. The tool offers public and more secure options.

STAR Voting can also be set up to run using Google Forms by following this tutorial.

The STAR Voting Implementation Team can be consulted or contracted to help set up or officiate a STAR Voting election for governmental or private sector elections and events. Options range from basic to highly secure and fully auditable voting with credentialing and paper ballots, or can be customized to meet your needs. For more information or for paper ballot templates please email [email protected]