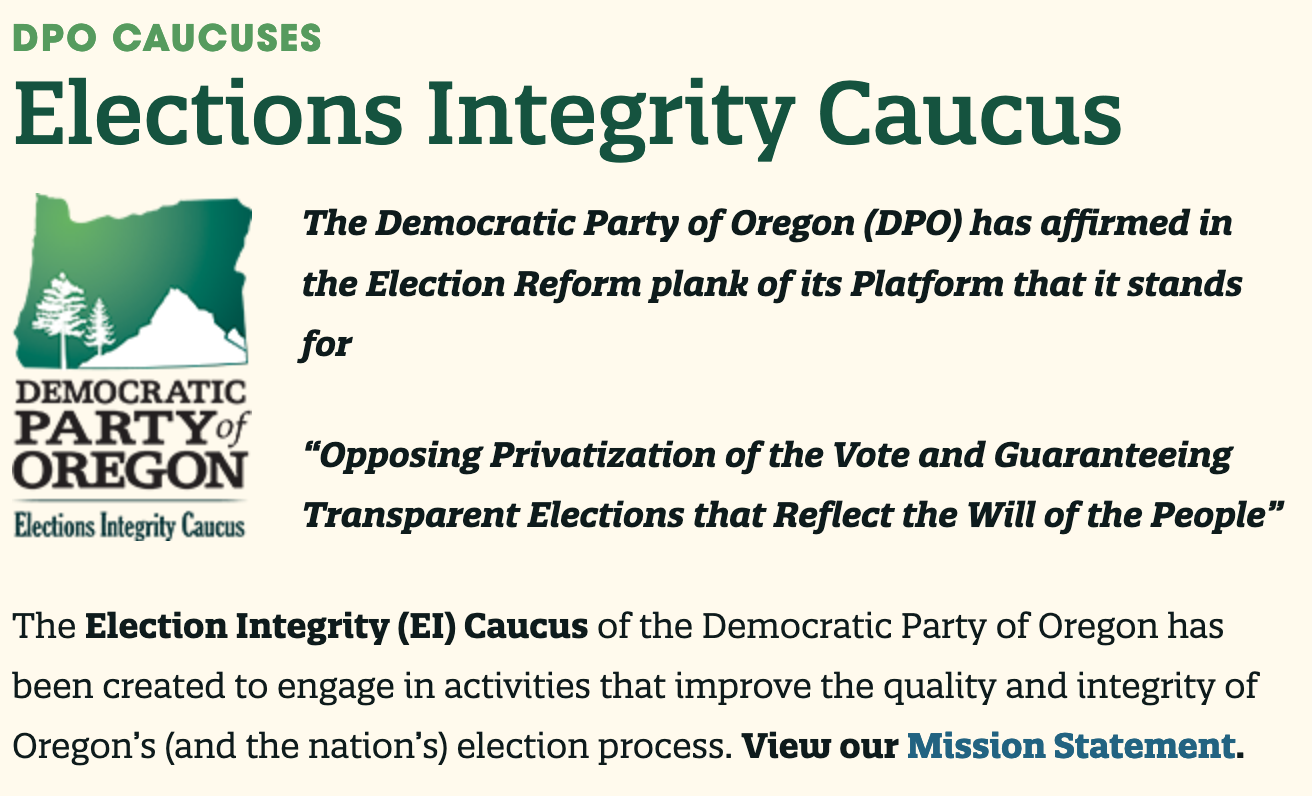 On 6/13/19 attendees at the Multnomah County Central Committee participated in a pilot project to compare 3 voting methods: “Choose-One” Plurality Voting (our current system), STAR Voting, and Ranked Choice Voting. All three ballots contained the same list of candidates; the candidates running in the 2020 presidential democratic primary.

Attendees were each given an envelope containing 3 ballots and a survey on which method they preferred. After a brief explanation and a summary of some of the pros and cons from advocates of both alternative voting methods, they were asked to vote.

In this scenario all three voting methods produced the same winner and the same top 3 candidates in the same order. 1st place: Elizabeth Warren, 2nd place: Bernie Sanders, and far below in 3rd place: Kamala Harris. What this tells us is that among voters polled there were only 2 truly viable candidates in the race. It’s interesting to note that both front-runners were strongly supported by each others’ voters. Sanders’ voters overwhelmingly scored and ranked Warren highly and vice versa. Though those two certainly split voters between then, there was no “spoiler” candidate strong enough to throw the election, and no other candidate strong enough to win, even with the majority divided between Sanders and Warren.

Looking further down the ballot was where some interesting differences were observed. Joe Biden came in tied for 5th place with 4% of the vote in Choose-One Plurality Voting, but did much worse in STAR Voting where he came in a distant 13th place with 109 stars and a 1.3 star average.

In contrast, Jay Inslee did much better in STAR Voting, coming in 4th place with a solid 217 stars, scoring close behind Kamala Harris. In Choose-One Plurality Voting, Inslee came in tied with Biden in 5th place with only 4% of the votes after Buttigieg, Harris, Sanders, and Warren.

For those curious why Inslee did much better in STAR Voting but worse in Choose-One Voting, and why the opposite was true for Biden, it’s possible that Biden may well have gotten a boost in Choose-One from voters assuming that he was a front-runner while Inslee likely got underestimated. One advantage of STAR Voting is that voters don’t have to worry about who is “viable” and vote strategically. They can safely score the candidates as they choose.

All three voting methods were tabulated by hand on 6/15/19 by a team of volunteers at the MultCo Dems headquarters.

“Choose-One” Plurality Voting: Ballots were sorted into piles for each candidate, and the piles were counted to determine the number of votes for each.

Ranked Choice Voting: Ballots were sorted into piles by 1st choice votes. The candidate with the least number of first place votes was eliminated, and those ballots were redistributed to those voters next choice if possible. This process was continued through 9 rounds until Warren had a majority of remaining ballots.

At a few stages in the elimination process there was more than one candidate tied for last place. A coin toss was performed (as is standard for official countywide elections) in order to determine who was eliminated first. There was discussion about whether it was better or more fair to eliminate both last place candidates at the same time, but as this had not been stipulated in advance it was determined to eliminate candidates one at a time.

In the elimination process there was also a ballot which was “exhausted” meaning that that ballot was unable to be transferred over to another pile after their candidate was eliminated. That ballot wasn’t counted in the final round where the winner was determined.

STAR Voting: Ballots were counted in two rounds. First, a scoring round to determine the total scores received by all voters for each candidate. Then an automatic runoff round between the two highest scoring candidates.

To tally the scores from all the ballots, one person was designated the caller and read the scores out-loud from the ballots. A group of volunteers had tally sheets for each score, 0-5, and when a number was called a tally was made on the corresponding sheet next to the candidate who received that score. Another person observed to ensure that the caller didn’t make any mistakes and also watched to make sure that the score was marked. Scores were then totaled by multiplying the score given by the number of tallies.. The two highest scoring candidates were deemed finalists who then advanced to the automatic runoff.